“Whatever you keep telling your friends about when you come home, that’s probably where your creative juice is…although sometimes, stories just present themselves.” Laurie McAndish King, travel writer and contributor to The Women’s Eye

A truly curious traveler is the best kind to follow, I’ve found, whether on foot or vicariously through stories and books. Never bored with the world–and thus, never boring–a curious traveler will always teach me something new.

Laurie McAndish King (@LaurieKing) is the curious type, with a scientist’s mind and a philosopher’s soul. Her first book, Lost, Kidnapped, Eaten Alive! True Stories from a Curious Traveler, takes the reader on an unusual tour. 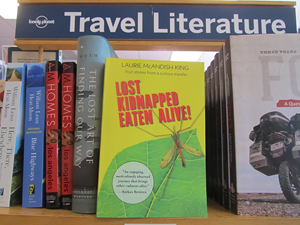 I first knew King’s name at least a decade ago, from her popular and indispensable online resource, Travel Writers News, and we soon crossed paths in person. Since then, her essays–always thoughtful, finely crafted, often hilarious–have been widely anthologized by Travelers’ Tales, Lonely Planet, Wanderland Writers, and Bay Area Travel Writers.

Her work has appeared in Smithsonian magazine and San Francisco Chronicle Magazine, along with numerous other publications, and one of her stories won the coveted Lowell Thomas gold award in 2013.

She has also become an accomplished photographer, created a five-star mobile app, served on the board of Bay Area Travel Writers, and recently has started to dabble in broadcasting. And on top of all this, she’s written several articles for the TWE website on various writers including Anne Lamott and primatologist Jane Goodall!

It has been fun to watch her star rise, and it was a great pleasure to attend her book launch at Book Passage in Corte Madera, CA, where she read excerpts from her story collection to an appreciative full house.

Here’s Laurie sharing her experience getting a massage by the healer featured in Elizabeth Gilbert’s Eat, Pray, Love. “In this case,” says King, “it was Eat, Pray, Scrub, and the result was not what I expected.”

King’s self-effacing, wry wit infuses her stories–and her audience–with laughter and warmth. While many of the tales in the book are funny, often side-achingly so, King doesn’t shy away from deeper engagement with the world, or turn a blind eye to heartbreak when she encounters it.

Following her personal passions, which include nature, culture, wildlife, conservation, and food, King likes to dive deep into a subject and find out for herself what makes things tick–or suck blood, in the case of some ferocious Australian leeches.

Whether she is compelled to seek out a folk-healer in Bali, marry a Maasai warrior (accidentally, she claims), battle the aforementioned leeches in Queensland, track lemurs in Madagascar, or learn how to be “more French” in Paris, she throws herself into each experience–yes, even the leeches–to emerge with new knowledge and a fascinating tale.

Along with laughs and some thoughtful reflections on travel, we in the audience were treated to samples of Irish brown bread from King’s grandmother’s recipe, and Balinese luwak coffee, which is uniquely processed by a small indigenous mammal.

Both specialties are featured in the book, along with King’s exploration of some other notable, local dishes from around the world. Her interest in regional foods is not always for the faint of palate.

Describing herself as “practically a vegetarian” at home, King admits, “Horsemeat actually tasted good. Blood pudding is really good!” In the book’s Afterword, which King says is just as important to her as the stories themselves, she ponders the bigger questions her stories inspired, such as: What is food and what is not food to a particular person or culture — and why?

“A lot of questions come up when one travels,” King says. “Some of them are not pretty, or the answers are not pretty. The opportunity and incentive to think about those questions is a really important aspect of traveling and seeing the world.”

“In Madagascar, for instance,” she continues, “it’s a very small, sinking country where the people and the endangered lemurs are in competition for the same land. That’s a complicated thing to think about.”

King went to Madagascar, a place with limited infrastructure, as an EarthWatch volunteer. She encountered no other tourists, just researchers and locals. Why go there? “It has such incredible endemic species of plants and animals,” she says, “I just had to see it for myself.”

Amusingly, the diminutive King doesn’t see herself a bold adventurer; in fact, she described herself as “a great worrier.”

“I always have great anxiety about my travel clothing and my suitcase,” she says. “I look for the perfect travel jacket and the perfect suitcase before a trip, and I never find them…I always think it would make my trip way better, but it never works.”

Insatiable curiosity, then, must be a very compelling force. The audience must have been curious, too, because the Q&A portion of the event was lively. A question shared by many was: how do you know what to write about?

“One of the hardest things for me is figuring out where the story is,” King admits. “Whatever you keep telling your friends about when you come home, that’s probably where your creative juice is…although sometimes, stories just present themselves. Like luwak coffee–when I heard about that, I knew I had to try it, and write about it.

It was the same in Ireland; I had never heard of  Sheela-na-Gig (an ancient goddess) before I arrived. But when I first got there, I saw a fairly pornographic image of her in a book. I was quite shocked by it. So of course, I had to search her out. It doesn’t always have to be a big deal; what you write about can have more to do with your own emotions than the actual circumstances.”

Did she save anything for the second book?

“I have some ideas,” King demures.

‘Twas curiosity that killed the cat, they say, but I’m betting that cat had some great stories. 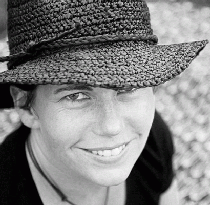 Laurie Weed (@Mobile_Laureate) is a freelance writer and editor, semi-retired nomad, and the digital producer of Tales To Go, a new mobile subscription from Travelers’ Tales.

She lives in Sonoma County with her young daughter and aging Volkswagen, and dreams of getting them all out on the road.